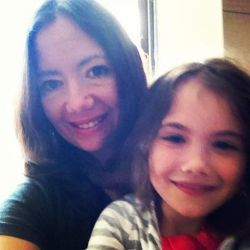 As you may very well be aware of it by now, October is Breast Cancer Awareness Month. Every year, we all are made aware of the dangers of breast cancer. If you’re like me, every year, you’ll get an invitation or two from well-intentioned women on Facebook asking you to participate in one of the “breast cancer awareness memes”. Many of my friends know that I always turn those invitations down but what many people don’t know is that about 10 years ago, I had a breast cancer scare.

In March of 2003, I was working for a company located in Los Angeles that owned several Latin American fast food restaurants around Southern California. The company was expanding quite rapidly and because of that, we held a LOT of lunch meetings. You might think that eating free lunch was a nice perk, but the truth is that for every bite of the fried chicken and fries that I ate, I was unknowingly putting toxins in my body… or maybe I was pretending to be unconscious about it, who knows. The truth is that I KNEW that diet was a big contributor to breast cancer, however, for some reason, I thought “it won’t happen to me.”

One Monday morning I woke up and I felt a lump on my left breast, it was the size of a golf ball and it hurt… it hurt like hell. I asked my hubby to check just to be sure. The sense of fear that I felt that day is something I will never forget. I called my friend Lynn to speak with her, I could hardly talk from the fear as I choked up telling her what was going on. She referred me to a friend of hers, a naturopath who has worked with celebrities in Los Angeles (yes, it WAS Los Angeles after all!). I made an appointment with my doctor anyway and proceeded to make an appointment with the naturopath, Constantine. I was told by Lynn “do NOT tell him why you’re going, just let him know that you’re my friend and I will go with you.” So I called Constantine, and did not tell him why I was seeing him. In the meantime, I went to my doctor who immediately ordered a biopsy. I scheduled said biopsy for Monday of the following week. This week felt like an eternity.

Constantine saw me that same afternoon. Lynn met my hubby and I and we walked into Constantine’s office. A Russian man, with a very thick accent and a bit rough. He asked me several questions, made several tests and then looked at me and said “The lump on your breast, that’s why you’re here. It’s not cancer.” I hadn’t told him yet why I was there to see him. Lynn asked him to repeat what he said and so he did “it’s not cancer.” I felt  a bit of a sense of relief.

Constantine told me that I needed to change my diet, he also told me that I needed to rid my body of the toxins and recommended some specific actions to take that week. I followed each step thoroughly and by Saturday, the lump was gone… or at least I couldn’t feel it anymore. When Monday rolled around, I went to the appointment and let the doctor know that I could no longer feel the lump. He did a breast exam and sure enough,  he couldn’t feel it. He let me know that he would do an ultrasound just to make sure. The results came back, there was no lump and no need to do a biopsy.

You might be wondering why  I don’t participate in these “breast cancer awareness memes”. This is why, I KNOW firsthand that we need to do more than have a little fun game on Facebook. That announcing what my favorite place to put my purse on will make NO difference, not for me, not for women in general and especially not to  a friend or relative who is battling cancer, much less to a woman who might have cancer and not even know it. Cancer is a serious thing, it’s nothing to be playing around with. Stating that you’re “aware” that cancer exists does nothing to stop it from happening to YOU. So please ladies (and gentlemen too), screen yourselves, do a monthly self-exam, don’t miss your doctor’s appointments, eat healthy and exercise. it could save your life!

As for me, I’m FOREVER grateful that I’m healthy. I’m grateful that I made the necessary changes to my lifestyle to ensure that this never happens to me and I’m also grateful that I can teach my daughter early on, the health dangers of junk food.